Election 2010: Balance of Power in the Delaware Senate

Election 2010 was better for Republicans as they picked up one seat this year.  Dave Lawson (R-15) beat long-time Senator Nancy Cook, who was very influential on the Joint Finance Committee.  Here is the map of the new Delaware Senate: 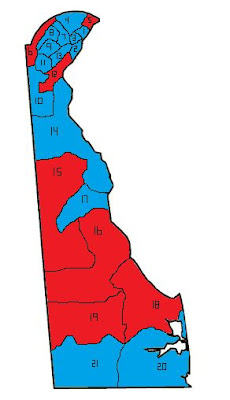 While the Republicans are far from controlling the Delaware Senate, one more in the Senate helps.  The new balance of power is Democrats 13 versus Republicans with 7.

With nine Senate seats up in 2012, the Republicans should focus on winning those with strong fiscal conservatives.  The seats up in 2012 are 2,3,4,6,10,11,16,17 and 18.  More on who currently resides on those seats later, and who will be good to replace them.
Posted by Unknown
Email ThisBlogThis!Share to TwitterShare to FacebookShare to Pinterest