Did TSA Go Too Far?

Last month, in an attempt to beef up airport security, the Transportation Security Administration (TSA) began a roll-out of high-tech body scanners.  Despite the best of intentions, the scanners are receiving backlash from airport patrons due to their invasive images that are very graphic. 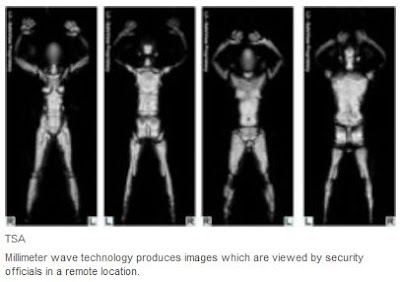 Fox News and other media outlets broke the story today on the major backlash by airport patrons and the new techniques to screen airport patrons. And thanks to them the awareness of these questionable techniques can now be evaluated by the public. Clearly, the images above are very graphic and revealing in nature.

More troubling are the procedure to conduct "enhanced pat downs" of those that opt-out of the body scans.

The question is why aren't other high tech imaging systems such as those used in correctional facilities to detect illegal weapons and contraband?

Meanwhile in Germany, protestors in German demonstrated in the nude (not really) in opposition to their airport scanners.  Is this what it will take to have TSA re-evaluate the revealing and intrusive passenger screening policy in the U.S.?