Election 2010: Balance of Power in the Delaware House

The balance of power in the Delaware House shifted more to the Democrats.  They picked up more seats and now control the House 26-15. 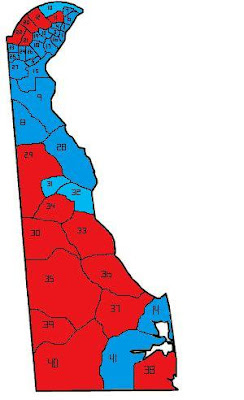 Election 2010 proved Republicans in New Castle County are at the biggest disadvantaged, as they only control the  affluent Hockession, Greenville, and select parts of Brandywine Hundred there.

Some key upsets include Rep. Tom Kovach (R-6) losing his seat; and the seat formerly held by retiring Rep. Dick Cathcart (R-9) switching to the Democrats, with John Marino losing to Rebecca Walker.

What is more disheartening is the fact that the Republicans will have even less of a voice in the General Assembly, with the exception of the southern Kent and most of Sussex counties.

2012 must focus on reclaiming every single House seat as we will get another shot at all 41 House seats.  For 2012, Delaware must retain all fifteen and pick up at least seven to control the House.
Posted by Unknown
Email ThisBlogThis!Share to TwitterShare to FacebookShare to Pinterest