Yesterday, the News Journal published an article that the the clout of the values voters will be tested in the upcoming election.  Well, if the tea leaves are correct - it will be the values voters that will enthusiastically go to the polls and cast their vote.

Much buzz has been made because of the Tea Party win that propelled Christine O'Donnell and Glen Urquhart to victory in the GOP Primary in September.  That victory was for the soul of the party to carry the banner for November.

Here we are, a week away from finding out who will go to Washington.  Will it be Christine O'Donnell and Glen Urquhart (or Brent Wangen), who will carry the banner of values voters, or will it be Chris Coons or John Carney?

Despite the economic woes of the State and nation, social issues are just as important.  Even hot campaign issues such as as cap-and-trade are vital to the the values voter.  Just as ending taxpayer abortion funding; supporting the Defense of Marriage Act and a ban on gambling.

Last week, the Delaware Family Policy Council (www.delawarefamilies.org), published its 2010 General Election Voter Scorecard.  The scorecard ranks candidates on both federal races and for both chambers of the Delaware General Assembly.

Candidates for both the U.S. Senate and U.S. House were graded based on a questionnaire by the Delaware Family Policy Council on values voter issues.  The questionnaire for the federal races included the following questions:

In the U.S. Senate race, Christine O'Donnell (R) scored an A, while her Democratic opponent Chris Coons scored an F on protecting Delaware's families.  Indepenent Glenn Miller scored a B.

In the U.S. Congressional race, Glen Urquhart (R) scored an A, while his Democratic John Carney scored an F on protecting Delaware's families.  Independent Earl Lofland scored a B, and Libertarian Brent Wangen scored a C. 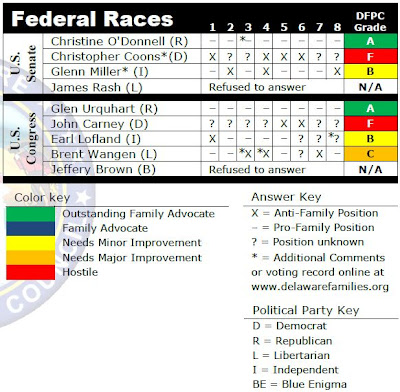 The Delaware Family Policy Council also submitted questionnaires to the candidates for Delaware House and and Delaware Senate.  The questionnaire for the General Assembly races consisted of:

1. Freedom from Federal Health Care Reform
insurance mandates?
2. Protecting families from “gender identity or
expression” legislation which threatens
religious liberties and allows men access to
public accommodations assigned to women?
3. Defining marriage as being between one Man
and one Woman in Delaware’s Constitution?
4. Rejects the anti-family position that one
man, one woman marriage is discriminatory?
5. Parents’ have the right to know what is
being taught in the classroom & to opt their
child out?
6. Protect families from new gambling
locations?
7. Support the right to have a deeply held
religious belief about marriage without
threat of liability?
8. Eliminating Sports betting and table games?
9. Freedom of speech for educators, counselors
and prayer vigil anttendees near abortion
clinics?
10. Eliminating abortion funding in Delaware?
11. Equality in funding and access for private
school students seeking driver’s education?


Terry Spence, Republican candidate for DE House (18th District), and Representative Dave Wilson, Republican (35th District) were the only only two Delaware House candidates to have a perfect score.

Please check the DFPC web site for their scorecard, so you can make an informed decision to protect Delaware's families.
Posted by Unknown
Email ThisBlogThis!Share to TwitterShare to FacebookShare to Pinterest