Yesterday, the Doctors for Christine O'Donnell held a press conference asking all medical professionals in the State of Delaware to unite behind Christine O'Donnell who will fight to defund, and repeal Obamacare. The group of physicans from all across the state of Delaware also support, along with Christine that meaningful marketplace-based health reform is needed to address the rising health care costs in the United States. 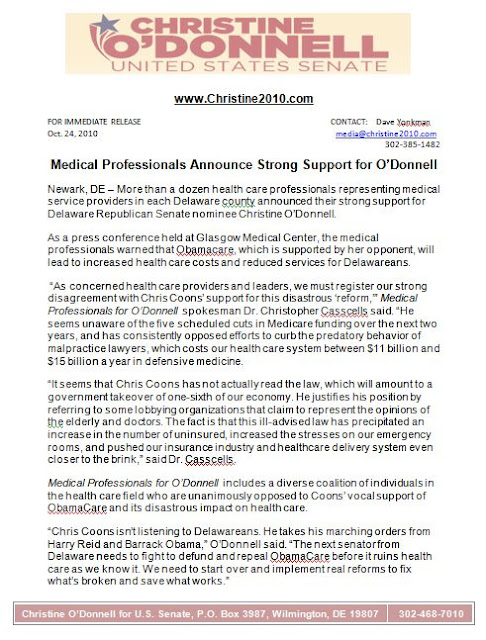 Christine has vowed to fight for:  medical malpractice tort reform, increased competition across state lines (comparable to auto and homeowners insurance), and medical savings accounts.
Here is the letter sent by the Doctors for Christine O'Donnell to all members of the Medical Society of Delaware:
Doctors for Christine O'Donnell
Dear Colleague:
This letter is written in support of the candidacy of Christine O’Donnell, candidate for the United States Senate Seat from Delaware.  As Delaware Physicians, we have experienced, as have our patients, the effects of changes in our nation’s health care policy.  None, however, will be as far-reaching as those anticipated as a result of the recently enacted Health Care Bill.  Patients, insurance companies, and physicians are already experiencing some of the cost shifting, service reductions, and special waivers granted by the current administration in Washington, DC.
Christine O’Donnell surprised many when she won the support of Delaware voters in the recent Republican primary election here in Delaware.  It certainly appears that she is regarded as the Republican candidate more likely to work responsibly to curb and control government spending and waste, repeal and replace the Health Care Bill, attract new business leaders to our state, and lower taxation for employees and businesses.  All of these initiatives may be seen as supportive to the efforts of physicians, families, and businesses in Delaware.  As United States Senator from Delaware, she will work to support medical liability tort reform which will treat patients and physicians fairly and discourage frivolous lawsuits; discourage third party interference in the physician-patient relationship; and repeal and replace the current Health Care Bill in favor of a new bill with realistic solutions to reduce cost and increase access to care for our patients.
With the elections just a few weeks away, I would ask you to consider the events that have shaped the preceding two years with regard to public and health policy in our nation, as well as our present economic status and the national mood.  Continued blame of the Bush administration for the events leading up to the 2008 recession, inability of the current administration to increase employment for our citizens despite the injection of over a trillion dollars into the national economy, the dubious circumstances around which the Health Care Bill was passed and is being implemented, inaction regarding preservation of the Bush tax cuts for all Americans, continued slumping housing sales and increasing mortgage foreclosures, decreasing support for manufacturing and other jobs such that companies continue to leave our country in record numbers, an alarming increase in the national debt which continues unabated, inability or unwillingness in Congress to vote on a national budget, a continuing rise in the population residing in our country illegally, as well as issues related to what our children are learning in schools and increasing government encroachment into our daily lives…solutions to these problems require a compassionate, common-sense conservative approach.
I believe that Christine O’Donnell will work hard on our behalf to incentivize job creation and to preserve lower taxation for working families and businesses, that she will work to repeal and replace unfavorable or discriminatory portions of the Health Care Bill, and that she will represent with clarity and integrity the values upon which our nation was founded.  We hope to count on your support in November.  If you are uncertain about casting your vote, please consider that a vote for the Democratic senatorial candidate will decrease the opportunity for the Republican Party to overturn the current majority in the House and Senate.  We simply cannot afford to let that happen.
We hope you will support Christine O’Donnell, Republican candidate for United States Senate, with your vote on November 2, 2010 so that she may represent us in Washington, DC and begin the process of returning America to its citizens.  Please visit her website at http://christine2010.com/
Bryan McCarthy, DO          Parviz Sorouri, MD          Beth Duncan, MD MBA          Ken Hollingsworth, MD
Chris Casscells, MD
Delaware Physicians for Christine O’Donnell
Posted by Unknown
Email ThisBlogThis!Share to TwitterShare to FacebookShare to Pinterest