Who is Chris Coons? - Marxism

Chris has graciously said that he would like to keep this campaign about the issues and not about smears and personal attacks. I appreciate that and I hope he continues that position. This campaign SHOULD be about the issues that Americans and Delawareans specifically, care about. It should be about how to get the economy back on track and growing, how to stop reckless spending, what role the government should have, the most effective way to stem the rising tide of healthcare costs, how to best manage our energy resources and what the tax policy ought to be. There are other important issues but these are what I hear about the most. All of these issues come down to a difference in ideology. On one side you have those who seek to continue spending, often recklessly, your tax dollars, increasing those taxes to spend more and increasing government control. On the other, you have those who understand the need for a limited government, emboldened AND restrained by the Constitution who will control spending and lighten our tax burden.

Now I said before, that Chris wants to keep this campaign about issues and I agree, it should be about issues and not a few sound bites from someone's past. We have all made mistakes...yes, even me...especially when we were young. However, there is something about Chris' past that concerns me, and many of you as well. Back in 1985, he wrote an article entitled "Chris Coons: The Making of a Bearded Marxist". When I saw this I was hoping for a satire or some sort of joke. But as J.E. Dyer from Hot Air's Green Room tells us, Coons was quite serious.

Upon returning from a trip to Kenya, Chris wrote:

“I became friends with a very wealthy [Kenyan] businessman and his family and heard them reiterate the same beliefs held by many Americans: the poor are poor because they are lazy, slovenly, uneducated,” wrote Coons. “I realize that Kenya and America are very different, but experiences like this warned me that my own favorite beliefs in the miracles of free enterprise and the boundless opportunities to be had in America were largely untrue.”

“My friends now joke that something about Kenya, maybe the strange diet, or the tropical sun, changed my personality; Africa to them seems a catalytic converter that takes in clean-shaven, clear-thinking Americans and sends back bearded Marxists,”

However, it wasn't as if just the trip to Kenya aroused some deep part of Coons' questioning temporarily. Before Chris even left for Kenya, he was questioning America:

A course on cultural anthropology, noted Coons, had “undermined the accepted value of progress and the cultural superiority of the West,” while a class on the Vietnam War led him to “suspect…that the ideal of America as a ‘beacon of freedom and justice, providing hope for the world’ was not exactly based in reality.”

Although Chris does say that upon returning to Amherst for his senior year, he accepted that had "returned to loving America" despite discovering the nations faults, one must ask what faults he has determined America has. If Barack Obama, son of a Kenyan Marxist leader is any indication, our faults are many and great and the only pathway out is financial slavery and redistribution of wealth. There is reason to believe that Coons and Obama have much in common. 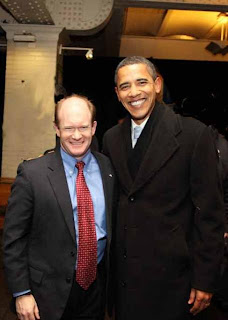 On September 16th, at a debate in Wilmington, Delaware, Coons reiterated his support for Obamacare as currently written and indicated that there is little going on in Washington that he would change. He also indicated his support for extending Miranda rights to terrorists. In fact, Coons sounded eerily like the "pet" that Harry Reid described him as. Coons did try to move to the center around fiscal issues but despite his polished debate skills (remember, he is a 2 time national debate champ) his record unfortunately doesn't bear out his claims. He made the obligatory reference to his TV Commercials which portray him as a fiscal conservative. Sadly, Chris has raised taxes three times ('05,'07 and '09), raided the county's reserve fund and increased water and sewer fees. He also references the corruption rampant during the Tom Gordon administration in his television commercial and suggests that he fought corruption. What Coons fails to mention is that the Democrat Gordon/Freeberry scandal took place while Coons himself was on county council. Additionally, what is not mentioned in Coons' commercials is that when Coons took office, the Gordon administration had left him with a balanced budget and a reserve surplus.

Currently, Chris Coons is presiding over his own scandal. County Council President Paul Clark is advocating for a project which he personally stands to gain from. His wife Pam Scott (liberals apparently love to keep a different name than their spouse so as to create doubt in issues like this) is a lawyer in the case. Clark has said he would recuse himself from any vote regarding the proposal but his involvement in lobbying for the case stinks. Coons has thus far not stepped in to suggest that Clark stop lobbying for the deal his wife stands to gain from. He's certainly no corruption hound.

Finally, Coons consistently calls on people to recognize that he was able to give County Council a AAA bond rating. There is truth in that statement but he doesn't tell you how Fitch Ratings gave New Castle County that rating. The fact is that Fitch only granted that bond rating to NCC because the County raided the reserve fund and decreased its value by more than 30% while Coons raised taxes 25%. The size of County government has grown every year under Coons and the budget has steadily increased. In 2009, Coons did make some cuts...he cut county employee pay by 5% and cut their benefits by 3% while the state cut worker pay even further. Meanwhile, county spending plans stayed in effect and other cuts were "avoided".
Posted by DEConservative
Email ThisBlogThis!Share to TwitterShare to FacebookShare to Pinterest
Labels: Chris Coons, Christine O'Donnell, debate, Delaware, Democrat, election, fiscal responsibility, healthcare, O'Donnell, politics, Republican, Senate, T.E.A. Party