A Graphical View at the 2012 GOP Presidential Field

The New York Time has a interesting graphic depiction of how the 2012 GOP prospects line up based on ideology and whether they are an insider versus outsider.  Here is the graph: 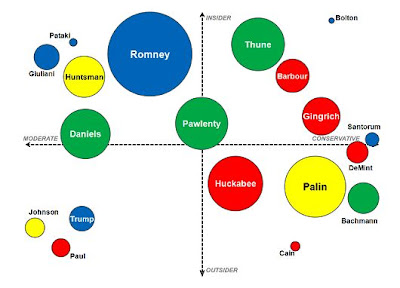 From a conservative standpoint, here is how the line up:

Tim Pawlenty is a true centrist with half of his positions on the conservative side, and half on the moderate side.  It is odd that the author of the graph placed former New Mexico Governor Gary Johnson as a moderate, as well as Governor Mitchell Daniels of Indiana.  Both have not governed as moderates.

As the article illustrates, it is interesting that Jim DeMint and Michelle Bachmann are considered outsiders.  Both have been part of Congress for years, but it seems that their enthusiastic support of the Tea Party principles make them at adds with the beltway elite.

The size of the circle depicts the likelihood of the candidate winning the GOP nomination.  That is if the field is as depicted.  Senator John Thune already eluded to not running in 2012, but may be open to 2016.

So conservatives, do we have our work cut out for us?  Remember what we are dealing with now, and why elections matter.
Posted by Unknown
Email ThisBlogThis!Share to TwitterShare to FacebookShare to Pinterest
Labels: 2012 Election, Election - U.S. President