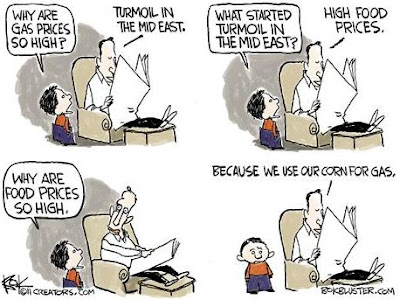 A picture speaks a thousand words.  The above cartoon should be a wake up call to Americans to tell their legislatures that the time has come to end corn-based ethanol used for gas.  Corn growers must make the not so difficult choice of growing corn for food, or grown corn for government corn subsidy for corn-based ethanol gasoline.

Can you blame the corn farmer?  No, of course not.  They are merely trying to put food on their table. And if if they can sell their corn and get government subsidy for it, they are golden.  But if you look the the commodity graphs for crude oil and corn, you will see both are are a skyrocketing trajectory.  This trajectory is causing consumers pain at the pump and at the food table.  You see, the corn used for corn-based ethanol gasoline comes at the expense of corn used for food products. 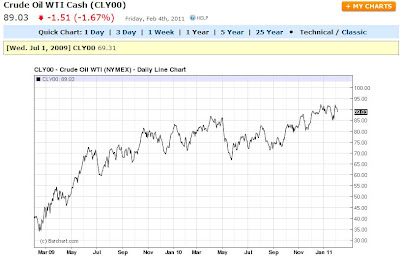 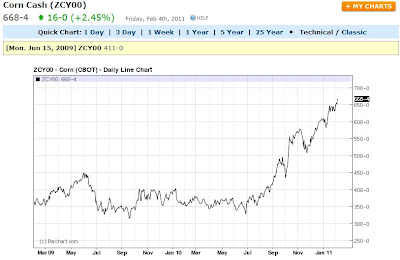 Food products that are delivered to the store are also higher because gasoline prices are also higher.  Crude oil prices have been on a volatile skyward trajectory for years due to the Iraq and Afghanistan wars, the BP oil spill, OPECs lower supply and Obama's refusal to drill locally.

The solution of this problem consists of a multi-pronged approach.  The first deals with moving from corn-based ethanol and the government subsidy to continue this idiotic idea.  The second is to explore using possible diesel to replace gasoline.  Diesel is more efficient, and the ultra low sulfide diesel is not the diesel of the 1970s.  It is cleaner, and better for the environment.

The second and most important action is that the federal government must allow for drilling in and around the United States.  It has been revealed that there are nearly four billion barrels of crude oil in out territories.  Extraction of this oil, rather than purchasing oil from countries that don't care for us, is a fiscal and national security issue.  The U.S. simply cannot no longer be dependent on foreign oil.  The turmoil in the Middle East is a telling sign that instability in that region is hurting our ability to defend this nation, and driving up consumer prices.  America is going broke at the expense of making other nation's richer. The biggest benefit to a Drill, Baby Drill action here, is the creation of possibly millions of jobs that will expand state and federal coffers with income and business tax revenue.

The reluctance and arrogance of the tree-hugger Statists (Democrats) are putting this nation at risk, and they know it.  For this they should be ashamed of themselves.  The thrive at the misery of the American public complaining that gas and food prices are skyrocketing.  When will America wake up?
Posted by Unknown
Email ThisBlogThis!Share to TwitterShare to FacebookShare to Pinterest
Labels: Commodity Prices, Consumer Prices, corn, gas, oil