American Spectator cites a Congressional Budget Office (CBO) report that by repealing Obamacare, it would reduce gross spending by $1.4 Trillion over the next decade.

Clearly this report refutes leading Democrats'  and President Obama's claims that Obamacare is deficit neutral.  This report comes nearly two weeks after the CBO stated Obamacare would cost America 800,000 jobs, or 0.5 percent by 2021. 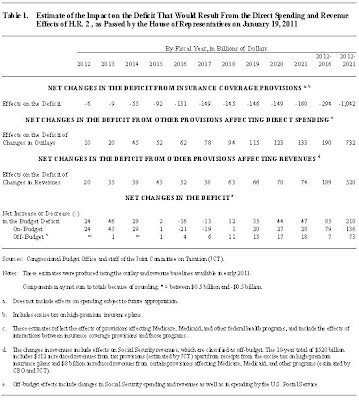 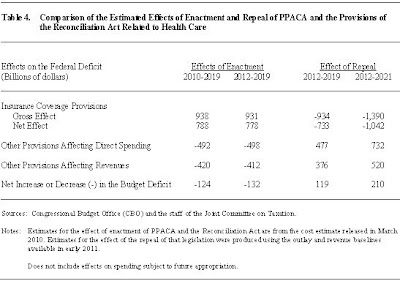 Not only does the net effect on the deficit decrease (Table 1), but the Congressional Budget Office also projects insurance premium costs to drop as well if the health reform is passed (Table 4).
How ironic that all of this analysis comes out months after the health care reform bill was passed.  On the bright side, at least it comes out now and House Republicans can continue working to force the repeal over the over-reaching unconstitutional bill.
Posted by Unknown
Email ThisBlogThis!Share to TwitterShare to FacebookShare to Pinterest
Labels: Congressional Budget Office, repeal of Obamacare