Merriam-Webster defines conservatism as: a political philosophy based on tradition and social stability, stressing established institutions, and preferring gradual development to abrupt change; specifically : such a philosophy calling for lower taxes, limited government regulation of business and investing, a strong national defense, and individual financial responsibility for personal needs (as retirement income or health-care coverage) 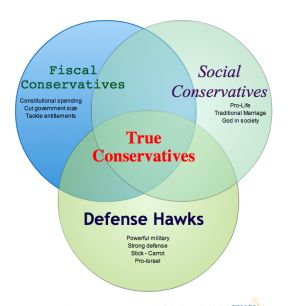 This three-legged stool is crucial in building consensus with individuals who share similar beliefs.  With 2012 barrelling towards us, stopping the progressive agenda is paramount to reaching conservatives regardless of what sphere they are in.  Here is why:

Blending of the Legs of the Stool