Not one person in the U.S. Congress nor liberal media is willing to admit that the accumulated federal debt is unsustainable.  Not one person, except may Ron Paul.

Karl Denninger at Market-Ticker.org has put out a pretty damning chart that is just down right frightening.  Here is the chart, and then we will discuss what it means. 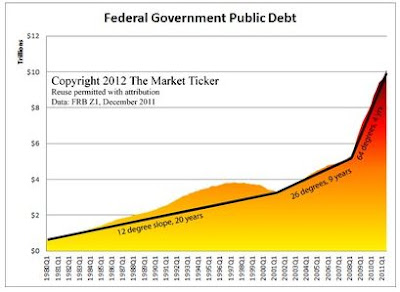 You see while, Greece is burning (literally), Washington is asleep deciding how to spend our money.  Despite the empty rhetoric (even from the Republicans), there is no serious effort to reign in federal spending.  In the current Presidential race, both current GOP candidate Ron Paul and former Presidential candidate and Governor Rick Perry have outlined ways to reign in spending.  Both have calls for the elimination of at least three federal cabinet agencies.

While Athens burns, and Washington is gathering the kindling NO ONE is even remotely looking at the how our government spends money.  Any sane member of either chamber in Congress would draft legislation on day one of office asking for an independent review of all federal agencies and departments to determine fit or purpose (are they really needed any longer) and what resources (budget allocation, staff, equipment, etc) are required to make them efficient and beneficial to the American public.

With the billions spent on pet earmarks, surely members of Congress can find a thousands ways to cut federal spending without breaking a sweat.  But I am sure as every well-intended member of Congress, the city corrupts and the power overwhelms the desire to do good.

The time to use a scalpel of trying to reign in spending is over.  It has failed.  It's time to bring out the machete.  Because doing the same thing over and over again, expecting different results is not working.  Stop the insanity.
Posted by Unknown
Email ThisBlogThis!Share to TwitterShare to FacebookShare to Pinterest
Labels: federal budget, federal spending, U.S. Congress