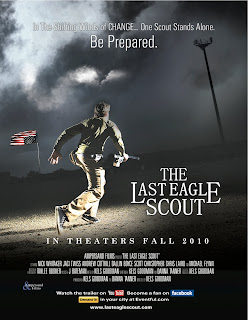 Independent film producer and director Kels Goodman, who also happens to be a real-life Boy Scouts of America Scoutmaster creates a dramedy (drama-comedy) on how political correctness can go overboard.

While the Boy Scouts of America is alive and well in present day America, the film portrays a possible scenario where political correctness and political bias can cause the erosion of society.  Without giving the plot away due to our recommendation to see the film, Big Brother has taken over and everything of 'bodily management' to lack of the First Amendment are evident.

I had the privilege of viewing this film at CPAC 2012, and a release date should be announced soon.  In the mean time, enjoy this teaser trailer.


Keep your eyes peeled for the release date and go see this film.
Posted by Unknown
Email ThisBlogThis!Share to TwitterShare to FacebookShare to Pinterest
Labels: Entertainment, political correctness