Tomorrow, America will observe the third anniversary of Obama signing the historic "stimulus" package.  The stimulus legislation is historic on many fronts including the failure to keep unemployment below eight percent (as promised), create shovel ready jobs (as promised) and by adding over $1.2 Trillion to the federal deficit.

To highlight this strategic blunder by the White House and Democratic leadership of both chambers of Congress, the Republican Study Group has created a picture perfect depiction of what happened to those jobs. 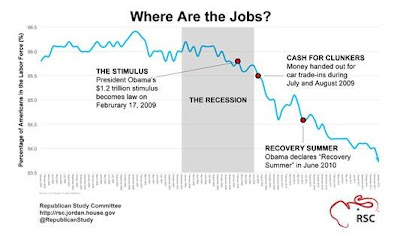 It is important to note that the above chart, as mentioned by the Republican Study Group, only represents the active "labor force participation rate".  If you notice on the vertical axis, the current (far right point) labor participation rate is only around 63.7 percent.  This means that 36.3 percent of the available labor force is not currently participating.

So thirty-seven months in, President Obama has failed to get nearly 15.1 percent of the workforce jobs.  And ironically, the January U3 and U6 unemployment metrics match the same unemployment metrics for Obama's full month on the job (February 2009).  So Obama has gone full circle, add over $4.7 trillion to the federal debt and unemployment 37 months later has not moved one inch forward.  But Democrats will call this progress. 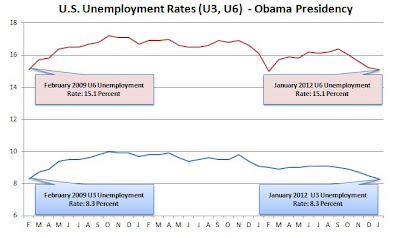