In 2008, Barack Obama won the Presidency partly due to his "celebrity" status with the 18-25 age block.  His speeches, his use of new technology, and his "hope and change" message won over the hearts and minds of this pivotal age group.  My how things have change four years later.

In a new study, the economic future for American college graduates is bleak and could spell electoral trouble for President Obama.  With these results, he could be a one-term President: 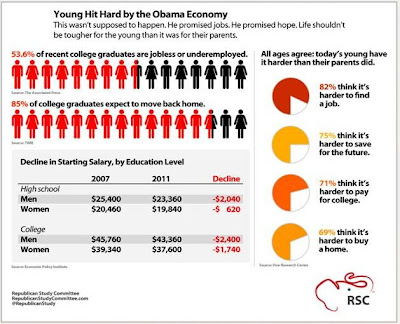 With a failing economy, those who are fortunate to find employment are less off than four years ago.  A pivotal question when deciding which Presidential candidate to vote for.  Here are some key metrics:

These salary metrics paint a daunting picture for college graduates as both dollars and time invested does not match the starting salary success of years past.  This could be another blog topic - but with these numbers - is college worth it?  Not under President Obama.

With regards to the 2008 platform of "Hope and Change", young adults are not sold on the performance.  Young adults saddled by less job and income opportunities realized it was just smoke and mirrors and if these numbers hold through election day, it could spell trouble for President Obama.  Here is why:

Hardly a success story.  With these numbers President Obama should have the Mayflower Moving Company on speed dial.
Posted by Unknown
Email ThisBlogThis!Share to TwitterShare to FacebookShare to Pinterest
Labels: 2012 Election, Election - U.S. President, President Obama