Just Who Is John Carney Representing?

Congressman John Carney (D-DE) as Delaware's lone Congressman, is our only voice in the U.S. Congress.  But in his first term, he has failed to understand who he represents.  Based on the scorecards put out by the Club for Growth and the regional Independence Hall Tea Party Association, he has failed to protect to the general welfare of the citizens that put him in office.

In true form, John Carney has either put party, allegiance to Obama or self above the required service to his constituents in how he votes.  In a previous Blue Hen Conservative post, we commented on the coveted Club for Growth scorecard of which Carney failed.  He also failed the recent scorecard put out out by the Independence Hall Tea Party Association on votes related to Tea Party principles.

Both scorecards underline a problem with how John Carney views America and how the Democratic Party disconnects with the hard-working middle-class American.  Let's look at key votes that highlight a pattern of contempt for the Constitution of the United States of America: 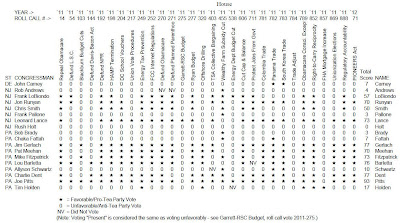 John Carney is up for re-election this November and must be replaced.  New Castle County President Tom Kovach is seeking this office and deserves our support.  We cannot afford to give John Carney another term to further erode the U.S. Constitution and America' relevance.