In case you missed it, the U.S. corporate rate is now the highest in the world.  The current corporate tax rate stands at 39.2 percent.  The United States was second behind Japan, until dropped it tax rate to 38.01 percent following economic struggles after last year's earthquake.  Today, the average corporate tax rate is 25 percent.

What Obama fails to understand is the U.S. Treasury loses out on having the highest corporate tax rate in the world.  No longer does the U.S. have a competitive advantage amongst cheaper nations to do business in and the treasury loses out on both corporate taxes and lost personal income taxes paid to those that would be employed stateside.  For Democrats to fawn over tax revenues, they cannot connect the dots between more jobs stateside to higher tax revenues in the federal coffers.

President Obama should take heed that the Heritage Foundation, albeit a conservative think-tank, has highlighted that after-tax personal income would rise by $2,500, and over 580,000 jobs would be created per year for the next year.  Higher personal income and the repatriation  of  jobs would give the U.S. economy a welcome boost.  But political ideology seems to prevail over common sense and it is wise to not hold one's breath that Obama would listen. 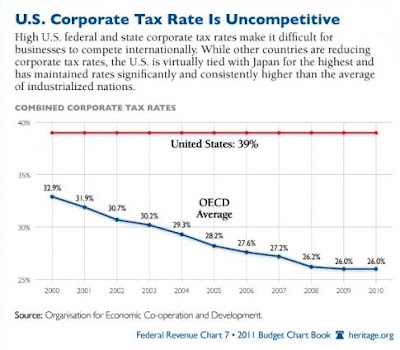