CASE STUDY: Indiana Booming With Jobs. Why Not Delaware?

Ever since Indiana Governor Mitch Daniels signed the bill to change how Indiana does business, there phone has been ringing off the hook with companies looking to set up business.  The law changed Indiana to a right-to-work state.  While it may currently lag Texas and Florida, Indiana is in the drivers seat on job creation and that will be a much welcome change for the rust belt state.

Right before the law became effective in March, Governor Daniels was quote as saying:

"We've already signed new agreements with three companies, one announced and two to come soon," Daniels said Monday. "There are 31 companies as of Friday night now on our negotiation rolls who've identified right-to-work as a major, if not the major, factor in their interest in Indiana."

The reason why Delaware has not embraced the right-to-work idea is a lack of political courage.  Currently, Delaware is a forced union state and with Democrats controlling the Governor's mansion and both chambers of the Delaware General Assembly, there is no political will to put Delawareans back to work.  The reason for that is right-to-work endangers the Delaware Way and the power currently held by Delaware Democrats.

Delaware unions come out en mass on election day here in Delaware to support the one party that butters their bread.  And for it, Democrats don't have the political courage to do what is right for the rest of the citizens who are not in a union.  But what did this blind loyalty get unions and Delaware Democrats - two closed auto plants (General Motors and Chrysler) and one failed promise from Fisker Automotive.

Imagine if the economic boom created by the Financial Center Development Act of 1981 was replicated today?  It could, if elected Delaware politicians embrace right to work.   Just look at all of the states that have it and how do they compare to Delaware. 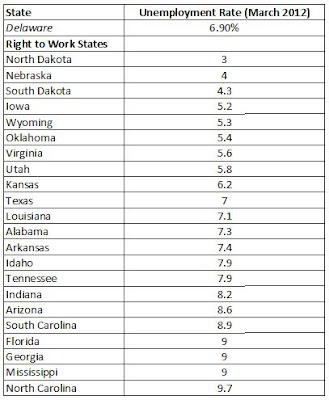 While Delaware's current unemployment rate is mid-line, Delaware's numbers may be skewed due to population demographics and citizens leaving the work force entirely.  Regardless, an unemployment rate of 6.9% is unacceptable. The citizens of Delaware deserve better, and a political sea change is the only way to get there.  This is why elections matter.