A Newark based educational group called Founders Values joined with Smart Girl Politics to host a United States Senate candidates debate at Cokesbury Village on Friday July 9th 2010. The event was supposed to kickoff at 7PM and the 4 declared U.S. Senate candidates were invited. Christine O'Donnell, a conservative Republican candidate for U.S. Senate who is challenging Congressman Mike Castle for the right to run against New Castle County Executive Chris Coons (Democrat) and Libertarian candidate Jim Rash in the general election.

Both Christine O'Donnell and Jim Rash RSVP'd that they would attend almost immediately upon their invitation in the beginning of June. Chris Coons and Mike Castle recieved their invitations at the same time as O'Donnell and Rash but did not reply. After repeated contact attempts and discussions with senior members of the Coons and Castle campaign staff, the debate was canceled on July 6th due to the inavailablity of half of the invited candidates. While Chris Coons has still not officially declined or acknowledged the event, Mike Castle did release a written response which is dated July 7th. The following is from an email sent by a Castle campaing staffer:

Dear Evan,
This was placed in the mail yesterday, and we wanted to make sure you had
recieved a copy. See attached letter.

(below is a copy of the letter they sent...ask yourself if this is acceptable) 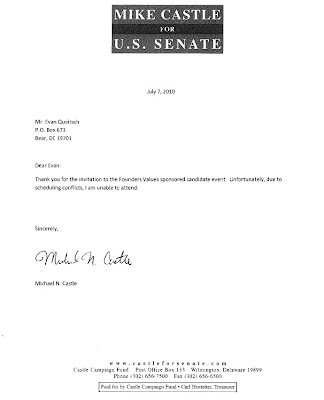 Congressman Castle was given a full month to respond and chose to do so with a letter dated 2 days before the event? This is unacceptable.