This years convention (I am told) was the largest turn out in many years and it showed. Caucuses were squeezed into hallways and small conference rooms that bulged with the weight of establishment Republicans and a few T.E.A. party members. Of course the stalwarts were there but interestingly enough some of the MAJOR players in the GOP remained "sticker neutral" (meaning they backed none of the candidates who were competing for office). THAT above any other fact shows that beneath the GOP leadership's cries for unity is a deep division amongst the brightest budding stars and the dimming party elites. A new era is about to begin within the GOP and this year's primary election could be the catalyst for it.

There were two contended nominations at this years convention

The first was for the people's United States Senate seat formerly held by Joe Biden. The Delaware GOP had decided that Mike Castle would be the establishment candidate and Christine O'Donnell had sought T.E.A. Party support. I was honored, as a T.E.A. Party leader to be asked to nominate Christine. I began by speaking about why we have debates in politics and why it is healthy. I also talked about James Madison who is not only the "Father of the Constitution" and our 4th President but also the "Father of Partisanship". Having served his constituents as both a Federalist (when he wrote the Constitution) and later as an Anti-Federalist (fighting against Hamilton's banking system), Madison understood the need for the parties (or factions as he called them) to present clear differences to the voters and to force them to pick a side. I argued that Congressman Mike Castle and challenger Christine O'Donnell couldn't be more different and I pointed to many of Castle's liberal votes as proof. During my nominating speech Castle's supporters (who weren't even delegates) got up and began handing out campaign materials. Following my speech, Diane Hernandez from Smart Girl Politics took to the stage and seconded my nomination of Christine. During her speech the National Committee Woman Priscilla Rakestraw made it a point to heckle her from the floor. The big boo's came when Jon Sherman took the stage and pronounced Mike Castle "the Arlen Specter of Delaware".

In fact, we T.E.A. baggin rednecks elicited such fear from Castle and his staff that they brought in the big guns. Castle's nominating speech was given by former Governor and Delaware GOP idol Pete DuPont (who incidentally spoke at the Wilmington T.E.A. Party rally exactly 1 month prior). There were two other speakers that seconded his nomination. One was a woman whose name I can't remember and the other is Sussex County Senator Joe Booth (who it is said will face Eric Bodenwieser (T.E.A. Party activist) in a primary and whose primary win was erroneously attributed to Castle's support when in reality it belongs to the hundreds of T.E.A. Party goers who made the rounds on Joe's behalf...thanks Joe). The woman whose name I cannot remember is only memorable for her unremarkable quotation of a founding father. Her quote came from Henry Clay and was obviously a Castle team members answer to my Madison laced speech. The problem with this is that Madison is both the "Father of the Constitution" and our 4th President whereas Henry Clay is known as "The Great Compromiser" who authored the Missouri Compromise in 1820 which allowed the sinful excersise of slavery to continue in Missouri and other states south of the 36th parallel. When Clay was appointed Secretary of State, his maneuver which had won John Quincy Adams the election, was called a "corrupt bargain" by many of Jackson's supporters and tarnished Clay's reputation. Finally, it was also mentioned that Mike Castle is the 5th Great Grandson of Benjamin Franklin who referred to himself as "an extreme moderate" (just watch "John Adams") and who was a great political mind if not the most honest of all the founding fathers. 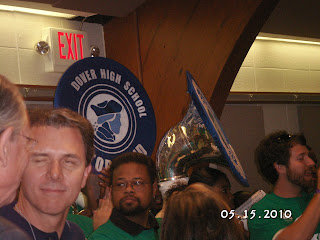 So here are your Dover High tax dollars at work. 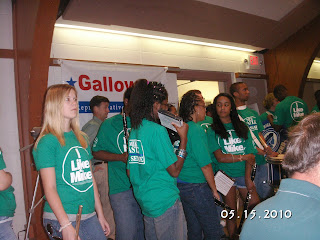 Are they allowed to wear those shirts?

But I digress, it took a band, a theme song, a sitting State Senator and the most beloved former Republican governor in state history to combat Chistine O'Donnell and her band of merry T.E.A. Party leaders. The final outcome? Despite the complete chaos that erupted with Mike Castle being NOMINATED, Christine O'Donnell still carried 30% of the room. 30% of the GOP establishment (that's who generally attends these conventions)jumped behind Christine. Couple that with the fact that key players (not the tools who do as they are told) but real leaders showed the party their true feelings by not falling in line and refused to show allegiance to the two "party nominees" and you have a convention that was all BUT full of "unity".

In the other contested race (for U.S. Congressman) Michele Rollins took 70% of the GOP establishment vote in a second ballot after Kevin Wade was removed from consideration. So Glen Urquhart and Christine O'Donnell each carried 30% of the GOP establishment Republicans. Interesting considering that these two candidates also stand for the "T.E.A. Party" values that 70% of regular Americans (primary and general election voters) support. Can Glen and Christine carry that message to the regular folks and win the day in September? Absolutely and with the O'Donnell campaign receiving attention from Senator Jim DeMint, Tony Perkins from the Family Research Council and Sarah and Todd Palin as well as Doug Hoffman (the man who discovered Doug is now the man behind the O'Donnell campaign) she is poised to begin her fight from 30% (as opposed to 0% where most candidates start). Glen certainly has the money and message but has thus far lacked the ability to reach out to local grassroots groups and to align with other T.E.A. Party candidates to present a more united front in the upcoming elections. He would do well to make such an effort.

In closing, the convention out come was a surprise to most of us realistic attendees. Castle and Rollins beat the drums and dumped their warchests and stomped the competition. With that said, both Urquhart and O'Donnell took home 30% of the vote from the GOP establishment and THAT is a major accomplishment that bodes well for them in September.
Posted by DEConservative
Email ThisBlogThis!Share to TwitterShare to FacebookShare to Pinterest
Labels: Christine O'Donnell, Congress, Constitution, Convention, Glen Urquhart, GOP, government, Kevin Wade, Michele Rollins, Mike Castle, Republican, Senate, T.E.A. Party