At the eleventh hour, Congressional leaders and President Obama agreed to a deal that would prevent the shutdown of the federal government.  The deal consists of $38.5 Billion dollars in cuts, mere crumbs given the multi-trillion dollar budget and over $14 Trillion in accumularted federal deficit.  Given the mandate given to Speaker John Boehner (R-OH), and the House Republicans we could have done better.  Much better. 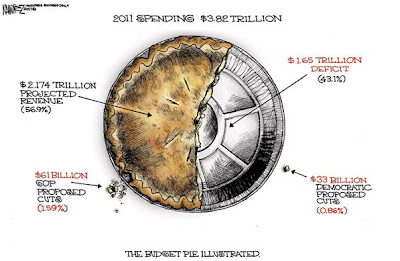 To be honest, Boehner caved when the Democrats balked about defunding Planned Parenthood.  Many Democrats accused the Republicans as "trying to kill women" and other childish attacks just so the Democrats can continue to murder innocent babies.

And the Republicans were not forceful enough in defunding Obamacare, which takes affect today, now that the federal government has a FY2011 budget.   Let's not forget that the Republicans took back the House on the promise to do what ever was necessary to defund and repeal Obamacare.  By not agreeing to defund Obamacare, Congress kicked the can down the road to the upcoming debt ceiling and FY2012 budget debates.  The longer we stall, the harder it is to remain strong and focused on the mission at hand.

As Congress marches towards its next battle of deciding whether or not to approve an increase to the federal debt ceiling, let's hope Boehner & Co. use more force and reject an increase.  Republicans must realize that we cannot continue to make deals where the interest on the national debt paid daily exceeds the cost of the deal made to appease the Democrats.  Remember, we are dealing with crumbs here.  Mere window dressing.
Posted by Unknown
Email ThisBlogThis!Share to TwitterShare to FacebookShare to Pinterest
Labels: federal deficit, federal spending, FY2011, FY2012, U.S. Congress