How Obama is Driving Up Gasoline Prices

No matter where you go - talking to friends or chatting at the water coller at work - everyone is complaining about the high gas prices.  It is no suprise that gasoline prices these days are causing families throughout the coountry headaches over how to budget their household finances. Let's look at some statistics to see what has happened.

The AAA publishes its daily fuel gage report, and here it their price comparison: 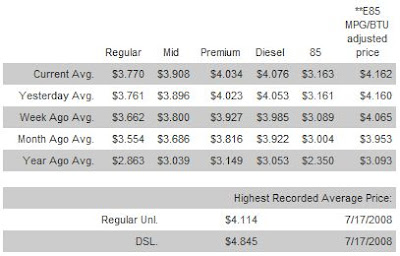 To illustrate the trajectory that gasoline prices are headed, this chart represents and inverted hockey stick. 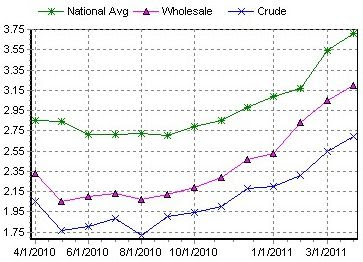 A rational person needs to ask what is causing this.  To be blunt, Obama's policies are causing the spike in gasoline prices.  For starters, let's report that gas prices in Washington, DC was $1.68 on Inauguration Day (January 20, 2009).  Now, that gallon of gas costs $3.77,  and increase of 124%.  Let's see how Obama has driven up the cost of gasonline.

The net effect of Obama's energy policies is to limit the available resources for energy consumption thus driving the cost of oil and gasoline higher.  But more importantly, the policies are preventing America from being energy independent.
Posted by Unknown
Email ThisBlogThis!Share to TwitterShare to FacebookShare to Pinterest
Labels: Domestic oil drilling, gas prices, President Obama