Apparently the controversy over basketball hoops has been going for a while before the State wasted taxpayer funds on removing the poles last Friday.  State Rep. Bryon Short (D-7), responded via letter to former DelDOT Secretary stating the basketball hoops were intended to be grandfathered since they were installed prior to the passage of HB234 back in the 139th General Assembly.

Short also states that the kids, not the poles, are the reason for the traffic flow issues.  And that this issue is not the purview of the DelDOT

Let's hope there is an investigation into this issue and the lying of the State Trooper to the homeowner on the stealing of the homeowner's private property.  Not to to mention the threats of arrest because they were questioning this.

Is this still America?

Here is a copy of Rep. Bryon Short's letter to Wicks: 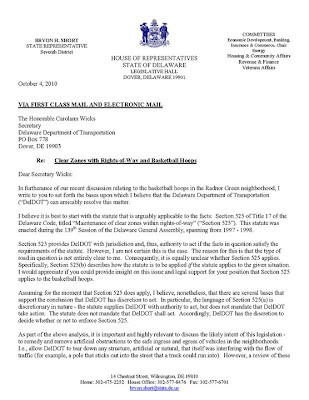 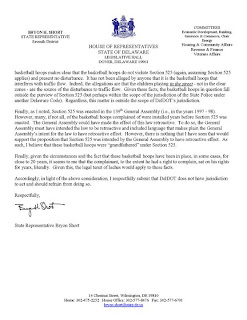 Posted by Unknown
Email ThisBlogThis!Share to TwitterShare to FacebookShare to Pinterest
Labels: DELDOT