Nobody likes being lied to, but when President Obama speaks on the federal deficit by blaming his predecessor, you better know the facts.  Clearly, Obama either is that clueless or he is in serial denial.  But the facts report a different picture.

Yesterday Obama, while talking about the deficit stated:


Making these necessary investments would be hard at any time. But it’s that much harder at a time when resources are scarce. After living through a decade of deficits and a historic recession that made them worse, we can’t afford to kick the can down the road any longer. So the budget debate that we’re having is going to be critical here in Washington. And so far, most of it’s been focused almost entirely on how much of annual domestic spending — what in the parlance we all domestic discretionary spending — that we should cut. There’s no doubt that cuts in discretionary spending have to be a part of the answer for deficit reduction.

Based on this statement, it is obviously clear that Obama fails to see what affect this programs are having on the federal deficit.  The federal Office of Management and Budget (OMB) reports that Obama is directly responsible for the tripling deficit since he assumed office in January 2009.  And pictures don't lie. 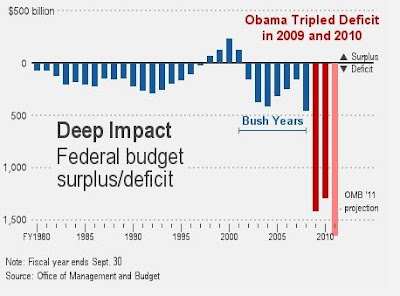