Harvard Prof: Obama Leading Us Back to Carter's 1970s 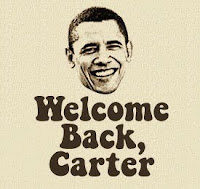 Not what you might expect coming out of New England, but Harvard professor Niall Ferguson said that President Obama is leading the nation back to former President Carter's 1970s.  That period in the late 1970S was riddled with high inflation, stagnant high unemployment and high energy costs.

Niall Ferguson points out that that ""Best case, we're about to rerun the 1970s, only with Barack Obama instead of Jimmy Carter in the White House."

The premise behind Ferguson's claims stem from the rampant printing of money, and the rise of China as the world's dominant manufacturing power.  He questions the ability of the dollar to remain as the world's reserve currency.  As the Federal Reserve's quantitative easing ends in June 2011, there is a big unknown as to what the interest rates will be, and guess they will skyrocket up to counter-act the rise in wholesale prices.


The rise of oil prices, part of it attributed to turmoil in the Middle East, but the other due to the low valuation of the dollar draws concern.  The high price of oil creates a huge uncertainty amongst American families and addes to the hidden cost of goods shipped around the globe.  Thus consumers are getting pinched twice - at the pump and at the store register.

This does not bode well for consumer confidence, of which could be controlled if the Federal Reserve stopped overprinting money, and the U.S. Congress controlled fiscal spending.  The latter is a must, but highly doubtful with a Democratically-controlled Senate and President Obama in the White House.  They are armed to reject whatever the Republican-controlled House proposes, and have already have.  Look at what they have done with the passage of funding cuts of Planned Parenthood and NPR.  They have rejected them as unjust and barbaric.

Until the political elite gets a grip on reality that the U.S. economy is on the verge of fiscal Armageddon, a return of Carter's 1970s is looking more likely a reality every day.  With the passage of every day and inaction by both chambers of Congress to use a hatchet to the fiscal budget and deficit, the U.S. careens down a road of no return where it just might be too late to save the republic.  Let's hope that is a wrong assessment, and that the political elite wake up to reality.
Posted by Unknown
Email ThisBlogThis!Share to TwitterShare to FacebookShare to Pinterest
Labels: federal deficit, inflation, Jimmy Carter, President Obama