Delaware Should Join Movement for 'Don't Tread on Me' License Plates

It is only fitting that the First State to join the union, join the movement to allow drivers to put 'Don't Tread on Me' license plates on their vehicles.  Three states - Virginia, Nevada and now Texas - have announced or passed legislation to allow motorists to express their patriotic enthusiasm for the Gadsden Flag plates.  But, will Delaware?

The State of Delaware on its standard blue and gold (actually the color of buff) license plate, proudly advertises 'The First State'.   Back on December 7, 1787, the Small Wonder started the experiment our Founding Fathers envisioned and what we have enjoyed to know as the United States of America.  What Delaware started, Delaware must continue. 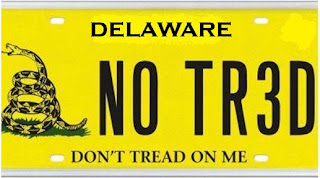 While some may balk at the notion of the Gadsden Flag being on display on cars throughout the State due to its symbolic use by Tea Parties across the nation. But, the Gadsden Flag is very much a part of America's storied history.  The Gadsden Flag was used by the first U.S. Marines in 1775, who along side the U.S. Navy to incercept incoming British ships carrying war supplies to the British troops in the colonies.  Named after its designer, General Christopher Gadsden of South Carolina, the flag was a symbol of America's fight against the British.  Often in writing before and during the Revolutionary War, America was depicted as snake because the snake (America) joined to fight a British dragon.

Now America, and its citizens are fighting for America's survival.  Millions of concerned Americans have held rallies and marched in our nation's capitol to demand limited government and fiscal restraint and accountability.  Nothing is more fitting for Delaware motorists than the opportunity to display the Gadsden Flag as moniker for America's independence, and why we fought for that independence.  For now, we are fighting for indepdendence from Statists who want to enslave Americans with endless social programs and exorbitant tax burdens.
Posted by Unknown
Email ThisBlogThis!Share to TwitterShare to FacebookShare to Pinterest
Labels: Delaware, Gadsden Flag, license plates, US Marines