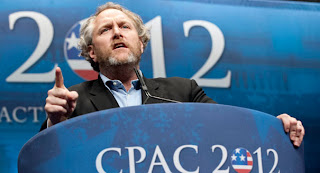 Earlier today, the conservative movement was stunned to hear of the passing of Internet blogger and conservative activist Andrew Breitbart.  Simply put, Andrew left us far too young.

While I never met Andrew Breitbardt personally, I admire his tenacity in seeking the truth and fighting the good fight against the Left.  No truer words were spoken by Rush Limbaugh today, when he called Breitbart "a bulldog".

Evidence of this conservative warrior are no other than his taking on Occupy DC at CPAC 2012, and his speech at the same event.  In the speech, Breitbart admits he takes the fight to the other side to show who they really are.  You have to admire someone who puts the other side on full display for the whole world to see.

Conservatives can honor Breitbart by picking up where he left off.  Nothing would please him more watching from heaven seeing his fellow conservatives soldiers take the liberal movement head on.  Learning from Breitbart, we must be courageous in showing the world just how radical the liberals really are, and how they are not who we can trust.  Like Breitbart did with ACORN, Anthony Weiner Shirley Sherrod was fearless in showing what these groups and people really stood far.

Fight on, fellow patriots!  Fight on for Breitbart!