In its annual report that ranks each state on how well it does to conduct and grow business, CNBC once again gave poor marks to Delaware.  In fact, Delaware has fallen into the bottom quartile, and with a dramatic turn-around the future does not look good for Delaware's economy.  For 2012, Delaware ranked a an anemic 43rd out of 50 (last year it ranked 36th. 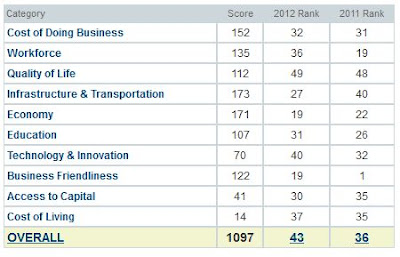 The mere fact that in 2011 Delaware ranked 36th and in 2012 it now ranks 43rd, shows that policies by elected officials are simply not working.  Only two categories showed improvement - economy and access to capital.  This is a red herring since the labor force continues to shrink in Delaware and around the nation, but also because the unemployment rates drops due to lapsing of benefits paid to the unemployed.  Access to capital have have improved but this is a fraction of the what it was in 2007.  Delaware also cannot compete with larger states for venture capital due to its small size and lower profile.

In the categories that will lead to job creation and business development, Delaware ranked worse in 2012 than it did in 2011.

Here are the definitions affiliated with the categories above and you will see why Delaware is not making the grade:

As you can see if you live or work in Delaware, the elected leaders are not living up to their end of the bargain.  The electorate trusted them to make things better, but instead continue to make it worse.  This is why elections matter.